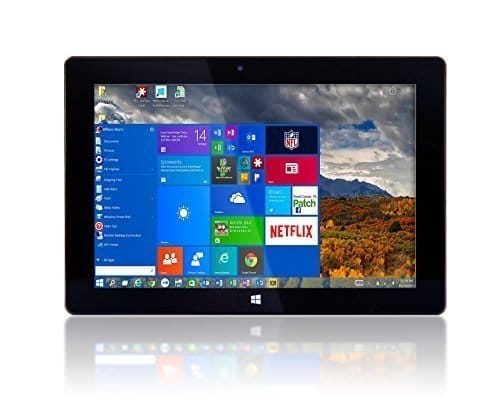 Since most tablets these days are made to be no thicker than half an inch, it’s difficult to find one that’s both slim in design and have a full size USB port rather than just a micro USB port, and not all tablets are of good quality even with these features.Expert Reviewer: Marcy Collins

Quick Summary:
The Fusion5 comes in an attractive ultra slim design for the ultimate user experience and comes with a built in standard sized USB port perfect for an external keyboard, mouse or even a USB Scanner.

It also is fully equipped with the newest user-friendly Windows 10 software quite a powerhouse.

With its Intel Quad-Core Processor, the tablet boasts wondrous storage space and power with up to 2 GB RAM and 32 GB storage, along with Bluetooth 4.0. The 10″ graphic display offers the user optimal viewing for your favorite TV shows, Youtube, movies, and even playing games.

Shopping for Tablets with a Standard Size USB Port

Nowadays, watching TV or movies, surfing the internet, getting some work done, and studying can all be done on a portable device. Tablets are just like computers, but they’re way easier to carry around and you have access to everything you need right at your fingertips. There are some people that prefer handling tablets over desktops or laptops for the exact reasons that tablets are made to be more compact. If you also prefer tablets or are just looking for an alternative extension of your daily tasks you do on your computer, then perhaps a tablet could be an optimal choice.

Because this Windows tablet is by Fusion5, you can expect great value, design, and experience being that Fusion5 is a leading expert brand in Windows and Android tablets. This ultra slim and sleek device lives up in terms of ultimate usability. Standard with every modern Windows tablet, the Fusion5 Windows tablet comes fully accommodated with Windows 10. It also has an impressive storage space and operating system, with 2 GB of RAM and 32 GB of storage (keep in mind that part of the storage is occupied by default OS applications) which is great if you need to keep documents and files backed up on your tablet.

The gorgeous 10″ screen on the tablet allows the user to experience HD resolution at 1280×800 pixels and high quality viewing so they can enjoy watching videos, reading e-books, and playing with apps. This Fusion5 Windows tablet has Bluetooth 4.0 so you can easily sync your Bluetooth devices such as wireless headphones and listen to your favorite tunes. The tablet runs with Intel Quad-Core Processor for a powerful performance, and you can store your files into a flash drive since there’s both a micro-USB and a full-size standard USB port included.

Additionally, there is a dual camera feature with a lens on the front and a lens on the back. When you charge the battery up to full power, the average battery life will last up to 5 hours. Because of its compact design, the device weighs no more than 1.5 pounds, and its dimensions come in at 6.8 x 0.4 x 10.1 inches (L x W x H).

Since most tablets these days are made to be no thicker than half an inch, it’s difficult to find one that’s both slim in design and have a full size USB port rather than just a micro USB port, and not all tablets are of good quality even with these features.

Devices like the iRulu eXpro X1 7-Inch Quad Core tablet with Android operating system has a full size USB port and slender build, but it has a smaller screen size, lower resolution, and lower storage space compared to the Fusion5 Windows tablet. While you can multitask, run apps efficiently, surf the web, and play games on the Android tablet by iRulu, it doesn’t seem to perform the same. Users have said that many apps are mysteriously not compatible with the tablet, and app tiles are a bit sluggish.

Another similar product is the Dragon Touch X10 10-Inch Octa-Core Tablet. Its performance and user experience is highly rated, with the Lollipop Android operating system and speedy applications like Netflix and Facebook. Although its screen size is a tiny bit bigger than the Fusion5 Windows tablet and an hour longer battery life, some of its features mark down the tablet in terms of overall use. While researching this product, I found that the internal speakers aren’t very loud so it’s difficult to hear videos, which served as a major Achilles heel to many buyers.

One more tablet to compare is the KingPad V10 10.1-Inch Tablet. Akin to the previously mentioned Dragon Touch tablet, the device is packed with an Octa-Core Processor and has virtually the same screen size as the Fusion5 tablet. Even with its impressive features like its HD IPS display and 1 GB RAM, it doesn’t quite match up to the Fusion5 Windows tablet in terms of usability. I found that many mostly use it for checking emails and other basic tasks since you can’t do too much with it, and it doesn’t have a very long battery time. The Fusion5 Windows tablet may not have as powerful a processor, but its user experience seems to exceed that of the Kingpad’s.

While the 10″ Windows tablet by KingPad has a good rating, it does have some minor flaws that I have noticed during my research. I found that the tablet’s battery life can hold up to 8 hours if you don’t have many apps open and keep the brightness down, but if you’re a multitasker, the battery life will drain quickly. Also, because this tablet is made by an independent company, there aren’t many cases and keyboard dock choices available.

The sound may be a bit too treble for some users, but otherwise if you wear headphones most of the time, then the sound should be fine. There might be a little lag if you’re using multiple programs at the same time, but it’s not a significant issue. Unlike other faster Windows tablets, it takes a bit of time to turn on, but it doesn’t seem too big of a deal for most.

In the case of graphics, it seems that the text is a bit small for some, and while the resolution is not the best, the tablet still provides a clear picture. The screen is a bit fragile, so a screen protector is recommended if you’re planning to use this product constantly throughout the day. Lastly, it takes a bit of time to charge the tablet’s battery fully, but if you’re patient, this shouldn’t bother you too much.

A good quality tablet lets you do pretty much anything you can do on a desktop or laptop. Many prefer handling a tablet because they’re made to be light, compact, and portable so you can watch movies, play games, finish some work, access your social apps, and if you’re in school, use it as a study tool. You don’t even have to go breaking the bank to find a tablet that does all of this.

With its slim design, mega storage space, 10″ graphic HD display, Bluetooth feature, and micro-USB and full-size USB ports, the Fusion5 Windows tablet is a marvelous choice if you’re looking for a tablet that works with you smoothly and has a quick performance level.