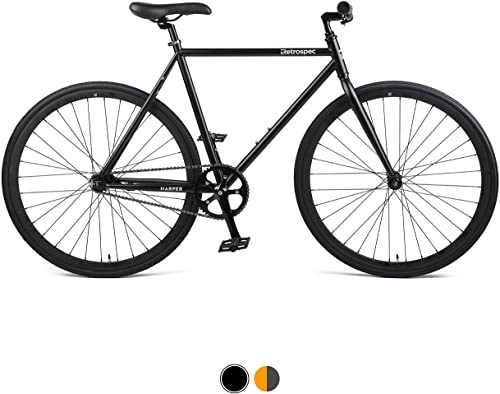 At the end of the day all we want out of our single speed bike is reliability and comfort. The Critical Cycles Harper model offers everything we could ask for in a well maintained, sleek, and professional looking package.Expert Reviewer: Jake Grant

Quick Summary:
What we liked about the Critical Cycles Harper is that it is a no frills look at cycling. You have your basic body which comes in a variety of different size: 43, 49, 53, 57, and 61cm. Measure your leg length and make sure that you pick the right bike for you. We also love that the bike is made of a steel composite which means that it can take a beating before you must have any sort of repair work done on it. To cap things off the flip-flop hub allows you to choose if you would like it to be a single speed or true fixed gear setting if you feel like trying out this more challenging riding style. The Harper also has 700 x 23c wheels which are perfect for coasting on concrete or dealing with city sidewalks.

Are you a cycling enthusiast? Are you ready to take your riding game to the next level? while most people just dip their toes into the fascinating world of cycling, some folks desire to take things a step further. Today we are going to talk about single speed bikes and what they can offer riders. Single-speed bicycles are a notoriously challenging bike.

One of the greatest things about modern bicycles is that we have the opportunity to purchase them with multiple gears, or speeds, at our beck and call. Having multiple gears means that you can always set yourself up for the terrain that you are riding on. So how do we peel back and revert to something so simple without losing something important the process? It’s simple: they are deceptively simple and one of the cleanest riding experiences you can have. Cruiser bikes and trikes are most often single speed bikes as well, taking advantage of the simplicity that single speeds offer.

Single gear bicycles eschew the modern concept of gears in favor of a smooth, clean, and tightly controlled ride. Instead of switching gears, you will instead be forced to constantly pedal to get to where you want to go.

Benefits of the Single-Speed Bicycle.

We’ve spoken of smoothness and simplicity and that is the focal point of the single-speed bicycle craze. Fixed gear bicycles bring riders back to the classic days of single gear riding. The reason that people like this, outside of nostalgia’s sake, is that you become more connected with your bike. When your bicycle relies on every single stroke of the pedals to move you end up falling into a rhythm that is so complete. Once you are in rhythm on a single-speed bicycle you will realize that you have no dead strokes, no wasted maneuvers — you are pretty much connected to the bicycle.

It’s great to have a ‘connection’ with your bike while you ride but there are more important reasons to consider this slightly beefed-up version of the fixie. We particularly enjoy how little upkeep there is involved with the single-speed bicycle. Now, we already hear your confusion: how can an older styled bike be easier to take care of? Don’t modern advancements improve on that facet? Well, the answer is yes and no. While modern bicycles enjoy all sorts of great improvements, single-speed bikes are so trimmed down and focused that there is nothing left to improve. Single-speed bicycles have precious little going on and you won’t be constantly fighting with repairs. On top of this fact, you’ll also learn to take care of your bicycle on every piece of its hardware. 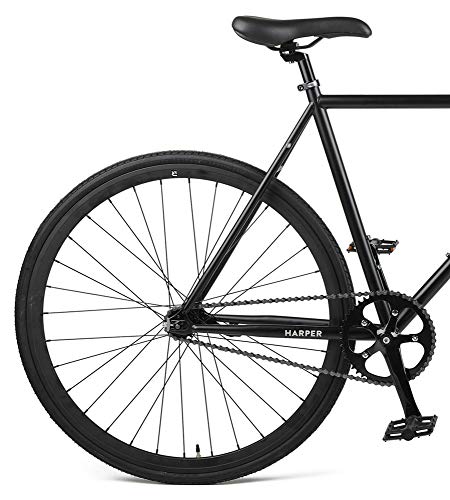 Now as you research the different kinds of bicycles out there you will no doubt run into some confusion regarding the fixie and the single-speed style of bicycle. Though some writers use the terms interchangeably, they are anything but. Single-speed bicycles allow you to focus on a gear (which you pick at purchase) which is the opposite of the fixie bike. Fixies have you focused on constant pedaling without any sort of break for coasting, due to the lack of freewheel. This means that there will be no coasting allowed — period. The more skilled riders out there will learn how to brake simply by choosing when and how hard they pedal while others will come to break by dragging a foot in a smooth, yet difficult to master, motion. This sounds different from the bike you are used to riding, doesn’t it?

However, the single-speed bicycle gives you just enough leeway that you can coast on your single gear. If you enjoy the single-speed bike but want something even crazier, head for a true and classic fixie. Can’t decide.. the make sure the bike you choose has a flip-flop hub that can do either. 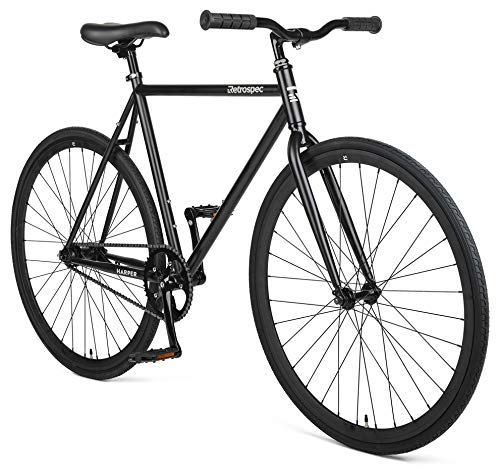 Alright, it’s time to start looking at actual bikes. We’ve learned about fixed gear bicycles and we’ve learned how single speed bicycles are perfect for people looking to get out on the road and get in tune with their bikes.

One of the most common reasons that people will purchase a single speed bike is for the sake of commuting, and the Critical Cycles Harper Single-Speed Commuter Bike is one of the best options we have available on the market today.

When we look for a single-speed bicycle we are trying to get something that has premium quality in is building materials with a cheap enough price that we can afford to take a day off to ride it. Critical Cycles has long been revered for their commitment to creating well-crafted commuter bikes, and this Harper Single-speed is no different. This bike can be had for under $250 on an average day and that makes it ideal for individuals looking to jump into the single speed world.

At the end of the day, all we want out of our single speed bike is reliability and comfort. The Critical Cycles Harper model offers everything we could ask for in a well maintained, sleek, and professional-looking package. Grab yours today and use it immediately for commuting, joy riding, and more.