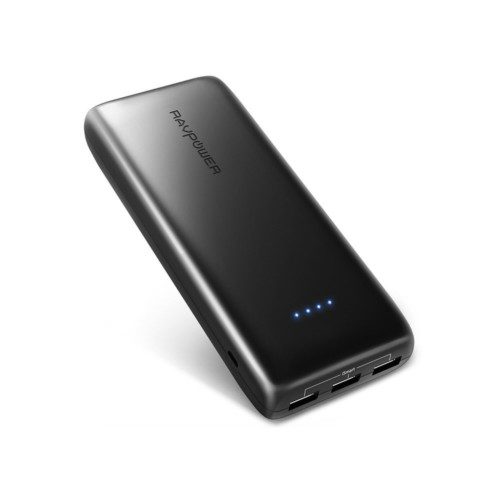 With its iSmart tech, the charger can decide whether to employ its fastest rate of 2.4A charging or whether to slow down the energy output for less advanced devices. While this will make charging older devices take longer, you can rest assured that this power bank is charging it at its fastest possible rate. Expert Reviewer: Justin Martin

Quick Summary:
The RAVPower 22000mAh 5.8A Output 3-Port Power Bank External Battery Pack has many great features that should keep you charged up for weeks to come. Currently, there is a lot of cheap competition on the market, but what no one tells you is that the manufacturers of these devices don’t always have keep your devices’ longevity in mind.

It’s great to know that this RAVPower unit has several key safeguards that will ensure that your mobile devices will get a quality, quick charge that won’t cause you trouble down the line.

It’s happened again: you’ve gone out on an all-day trip where you’ve surfed and texted on your phone and now it is sub 40 percent. You’ve got hours till you can grab your charger at home and juice up your phone. This happens too often for many people, especially if they have a aging phone with a low amount of battery capacity.

Nowadays, phones like the Samsung Galaxy S7 have 3600 mAh (milliamp hours) that seem to last for days between charges, but even these seemingly need a boost at the most inopportune times. If you’ve run into this low-power situation more times than you can count, maybe you should consider purchasing a portable battery charger.

These type of chargers are designed to quickly charge any device that is plugged into it. There are many models on the market today that will charge low capacity devices, like some iPhones and Android phones, several times on a single charge. As a matter of fact, I find that the sheer number of competitors on the market today makes it hard for the average person to make an educated decision on a quality product.

To help with this, I’ve compiled this review for a great portable battery charger that will help your mobile device keep a charge. The device that I’ve picked for your consideration is the RAVPower 22000mAh 5.8A Output 3-Port Power Bank External Battery Pack. It has a bevy of excellent features that will make keeping your devices charged a cinch.

The battery capacity of any given device will vary greatly from another device. For example, an iPhone 6 currently has a battery capacity of 1,810mAh whereas a Samsung S7 Edge has nearly double that at 3500mAh. With this in mind, it’s important to consider how much power output you can get out of any portable charger.

The RAVPower model that we are reviewing here has 22000mAh of energy storage, which is one of the highest available on the market today. This is extremely valuable for the charging of your devices. Even if you have a high-capacity, long life unit like the Samsung, you’ll still be able to charge this device six times on a single power bank charge.

Now consider how many times that would charge the Apple product; you’ll be able to charge that device 12 and a half times before you’d need to recharge your power bank. This type of capacity is ideal when carrying around the power brick in your bag. Even if you charge your device from time to time, you won’t have to fully recharge the device for weeks.

On top of this, the battery is also a high quality, high-density Li-polymer unit. This means that the device will retain 70 to 80 percent of its full power capacity, even after 500 charges, which is rare in many of its competitor devices.

Ports
Another great feature of this specific portable power bank is the fact that it comes with three USB ports. Let’s face it, not many people walk around with only one device on them anymore. Phones, tablets, cameras, and even laptops that use USB-C technology can all use charging from a dedicated power bank.

With independent, and most importantly, smart ports you’ll be able to safely charge three devices simultaneously. Charging rate will be optimized for each of your devices and each will shut down after a full charge is reached. Of course, this will reduce the capacity of this 22000mAh monster, but your devices will be charged properly.

As the mobile market evolves, many manufacturers are including faster and faster ways of charging their devices. Qualcomm’s fast charge technology will allow many devices to charge fully in under an hour. Still, some of us have legacy devices that still utilize a slower method of charging and this is another reason why this device really shines.

With its iSmart tech, the charger can decide whether to employ its fastest rate of 2.4A charging or whether to slow down the energy output for less advanced devices. While this will make charging older devices take longer, you can rest assured that this power bank is charging it at its fastest possible rate.

While this device isn’t quite capable of the fastest charges on the market, you can expect a full charge on a device like a LG G5 in about an hour and a half at 2.4A.

The one caveat with this device is that it’s pretty heavy for something that you’re going to be putting in your pocket. I would recommend carrying something like this in a bag or a purse and simply charging your devices in there when you don’t immediately need them.

When it comes to build quality, this is one durable little device. It has a smooth scratch-resistant surface that does a pretty good job not picking up extra fingerprints and smudges. Despite its weight, this device fits neatly in the hands and is not much larger than a Galaxy Note or a iPhone 6S Plus.

While this device isn’t water resistant, it does have a UL94 V-0 shell that’s very fire-resistant. As a matter of fact, this same material is used in luxury cars like Mercedes-Benz and BMW. Some might consider this strange, especially considering all of the overcharge and overheat protection that RAVPower has incorporated into this device, but it’s still nice to have this layer of protection.