This DreamSpa shower head is a LED shower head that actually changes the color of the shower head based on the temperature of the water at that time.Expert Reviewer: Marcus Trovinski

Quick Summary:
One of the most important devices in your bathroom is the shower head. If you have a shower head that only has one flow setting that is sub par at best, then a new shower head is in the cards.

The DreamSpa LED Light up Shower Head is one that offers great water pressure, several power options, and a gentle glow to make your shower more relaxing.

It is also the most advanced system on the market, which means that you will never need to worry about batteries to power the lights in your shower head again.

Taking a shower is something that each and every one of us does. Hopefully, this act is done once a day because as the saying goes: “cleanliness is next to godliness.” Taking a shower can be a refreshing part of your day, but nothing is more annoying than having low shower pressure from an inadequate shower head. Enter the DreamSpa LED Light up Shower Head.

This shower head is perfect for a modern bathroom. I know that I enjoy a soothing shower with a good amount of water pressure every night, if you do as well, then consider this shower head to create a spa–like atmosphere that will make your time bathing even more relaxing. Let’s take a look at some of the reasons why this shower head is currently leading the market.

This LED shower head features a full chrome design that is easy to clean and lasts a long time. This shower head is one of the most advanced LED shower heads on the planet. One feature that makes this device so advanced is the fact that batteries are not used to power the LED aspect of the shower head. In fact, it is powered by the water that is running through it.

The face of this shower head is 5.25 inches in diameter, which makes it one of the larger shower heads on the market, but this feature is also what allows the face to be large enough to sport a reflective rim along the outer edge of the showerhead. In addition, the edge is beveled to create an even more unique look. The shower also has an adjustable head, which can be extremely useful for homes where the individuals using the shower head stand at different heights.

This shower head uses 2.5 gallons of water a minute, and it has five different power modes that you can try. The modes are designed from a very gentle rain to a pulsating hydro-massage. There is even a pause mode that stops the flow of water to help conserve water. The face of the shower head features a three-zone dial that allows the water to be released from different areas of the device. Here are the different modes that you can choose from: 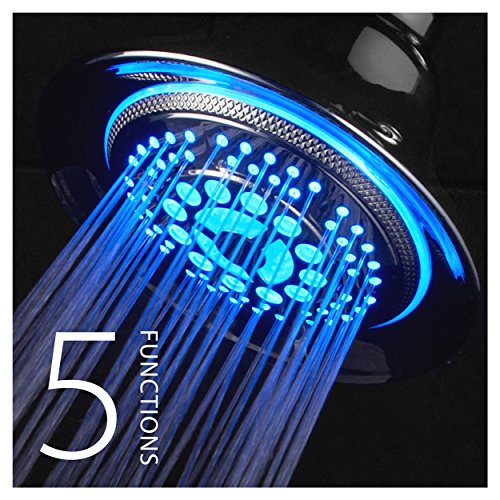 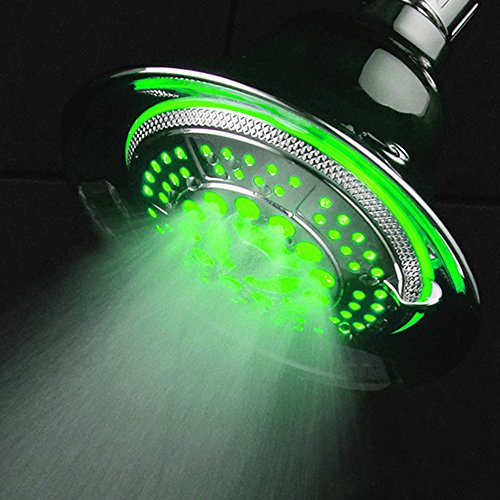 There are three different colored LED lights in this device, each of which is powered by the water that is flowing through it. Here is a breakdown of what each color means for you:

One feature that I already mentioned is that the shower head does not require batteries to make the LED lights function, but they do have a limited lifespan since the lights will eventually wear out over time. The good news is that you will not have to worry about that for a long time. The LED lights in this shower head will last for at least 100,000 hours of use, which means that even if you use the device to get a long shower a few times a day, the LED lights will remain in working condition for at least ten years.

There is also a one-year manufacturer warranty included with the purchase of this product, so if the water pressure is not up to par or the LED lights are not functioning properly, you will be able to contact the manufacturer and request a replacement.