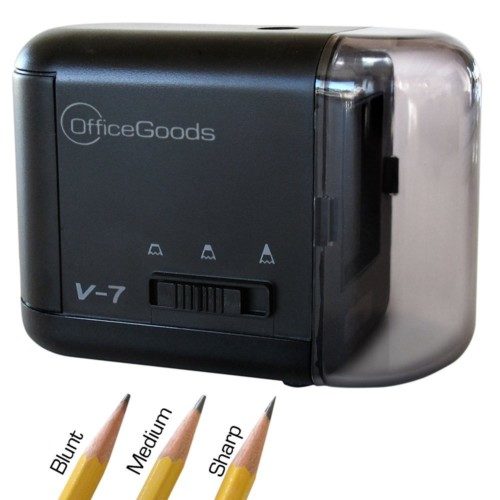 With three power options, three sharpening choices, a compact and safe design, quiet and powerful motor, and versatile sharpening capability, there’s little to no doubt that this sharpener can prove to be a useful office or work space appliance.Expert Reviewer: Julian Farnsworth

Quick Summary:
This electric pencil sharpener offered by OfficeGoods is the top rated among artists. It can helps achieve the perfect point virtually every time, and you can take it with you everywhere since it operates on batteries as well as being able to plug it in. Not to mention, cleanup is simple for all you have to do is empty the removable cup into the trash when it’s full.

Not only useful for artists, but it’s also fitting for the home office and at school for students and teachers.

The OfficeGoods pencil sharpener can help artists achieve their preferred point for either colored pencils, wax-based pencils, graphite pencils, or standard #2 pencils. It can easily handle pencils that are 6-8mm (for example, a #2 pencil is 6mm). It also comes with a special point adjuster, so you can have a blunt, medium, or sharp point thanks to the sharpener’s helical steel blade. For new pencils, it takes 10-15 seconds to sharpen completely.

On the bottom of the sharpener, there are nifty nonskid rubberized feet to prevent it from slipping off a desk. In terms of safety around kids, the sharpener has a feature where it halts operation when the shaving tray is removed. Conveniently, this particular sharpener can be powered by an AC plug, batteries, or by USB to a desktop computer.

Although the entry hole on top of the device is circular, it has no problem sharpening hexagonal or triangular pencils. The materials that the sharpener is made of is environmentally friendly, designed to be compact so you can fit it in your backpack when you need to take your work with you on the go, store it in your drawer, or place it on your office shelf. Because of its small size, you don’t have to be concerned about it taking up too much space, so having a small desk or large desk doesn’t matter.

The whole electric sharpener weighs around 8.5 ounces and comes in a decent size dimension at 5 x 2 x 3.5 inches and comes in either black or silver according to your color choice. If planning to use the battery option to power the device, four AA batteries are required, and unfortunately batteries do not come included with the sharpener.

Unlike most other electric pencil sharpeners, the OfficeGoods sharpener conveniently sharpens pencils in three different ways with its special point adjuster. Compared to OfficePro’s Heavy Duty Electric Sharpener, I think it just barely hits first place with its ability of giving three pencil point options. OfficePro’s sharpener also lacks AC plug power and USB power, unlike the OfficeGoods sharpener which has 3 power alternatives. Other than these differences, the OfficePro has many of the same features such as a quiet motor, compact size, and a stainless steel helical blade. While both are very popular among buyers, many seem to favor the OfficeGoods device due to some of its unique features not particularly seen on most other electric sharpeners.

Another comparable sharpener is the X-Acto School Pro Heavy-Duty Electric Sharpener, which I commonly see used in classrooms. While it sharpens regular and thick pencils well and performs quietly, it only does just that. Also, it is only powered by an AC plug and isn’t really known to be compact like the OfficeGoods sharpener, which brings me back to why I think it’s the most ideal and useful electric sharpener to choose from.

There are but a few minor flaws with the OfficeGoods electric sharpener to consider before buying the product. Although it can be powered by USB, its specs specify that it is for desktop computers only and is not recommended for laptops for apparently it takes more power than a laptop can give, although you can check with the manufacturer for compatibility.

While it can sharpen most pencils, it doesn’t handle thick pencils very well because it only has one single normal sized hole, with no variation settings. Furthermore, as it sharpens pencils, it doesn’t automatically stop when the pencil is already sharp, but it does make a different noise to help indicate that the pencil achieved a point.

I understand how frustrating it is to have a sharpener that doesn’t perform like it should, so my reasons behind why the OfficeGoods Electric and Battery Operated Pencil Sharpener is the most ideal sharpener for the everyday artist are genuine. With three power options, three sharpening choices, a compact and safe design, quiet and powerful motor, and versatile sharpening capability, there’s little to no doubt that this sharpener can prove to be a useful office or workspace appliance.