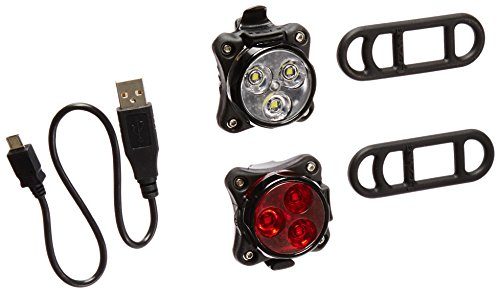 Bikes take a lot of punishment. With this in mind, Lezyne constructed these lights out of heavy duty machined aluminum. This is the perfect material for creating a lightweight, yet strong set of lights.Expert Reviewer: Luis Pradatco

Quick Summary:
The Lezyne Zecto Headlight and Taillight Pair is a great option for anyone looking for some extra visibility and illumination for night riding

If you find yourself consistently riding during these night hours, I don’t really think there’s a better lighting option for you, as these are bright, have multiple settings, and last for hours on a single charge.

As a way to reduce their carbon footprint, many people like myself are taking to the roads on their bikes when they are heading to and from work. The benefits of riding your bike for an hour or more a day are staggering, you’ll be in the best shape of your life and you’ll avoid the feeling of being in a can of sardines on mass transit. Morning and evening exercise are a great way to add a bit of energy to your day.

Now that we are approaching the end of the year, it’s getting a lot darker, much earlier. As a result of this, many times when you are leaving work at 5pm, you’ll be hitting the roads when they are their most busy and darkest. When it gets like this, it’s absolutely imperative that you wear reflective clothing, have reflective patches on your bike pack, and utilize some bike lights so that motorists can see you with ease.

Personally, I like to have a forward and rear light so that I am very clear to any motorists in my vicinity. Recently, I decided to see what the best bike lights on the market are. As a result of my search, I found the Lezyne Zecto Headlight and Taillight Pair to be one of the best bike riding lighting sets available today.

The prime stat that you’ll be looking at in any bicycle lighting systems is brightness. A lighting option should be bright enough for a driver to clearly see your bike so that the motorist isn’t surprised by your presence. I really like the fact that the lights are designed with a level of visibility that works for people on the side of you as well as behind you. The three LED bulbs on both the front and rear units shines out of the sides as well so that drivers pulling onto the road you’re on will be able to see you as well as someone directly behind you.

Also, with visibility firmly in mind, a light will need a certain lumen level during the day as well as the night. The Lezyne Zecto Headlight and Taillight Pair each have two distinct levels of illumination for each light.

These static 80 and 20 lumen settings aren’t your only choice when you have the Lezyne Zecto Headlight and Taillight Pair. As a matter of fact, the 20 lumens on the rear set are what the manufacturers consider to be “daytime flash mode”. This 20 lumen output flashes so that it’s more visible under high light situations. To access the other modes that are available in the rear light, simply click the rubberized buttons on the top of the light itself. Doing so will cycle through the different modes.

Here’s a list of them and the runtimes you can expect on a full charge, each of the flash modes that I’ve listed will flash a different pattern:

The front light, on the other hand, has similar settings. They include:

The Lezyne Zecto Headlight and Taillight Pair attaches very securely to your bike. While some of these types of devices attach through a secure clamping mechanism, Lezyne decided to use a rubberized attachment system that makes attaching and removing the lights relatively easy. While I wouldn’t necessarily leave the lights on the bike while they’re secured outside, you don’t really have to since they clip into place via the strap. This is somewhat handy, especially considering that you can ride into work, detach the lights, and run them up to your desk where you can charge them through USB.

Bikes take a lot of punishment. With this in mind, Lezyne constructed these lights out of heavy duty machined aluminum. This is the perfect material for creating a lightweight, yet strong set of lights. The plastic sheath that covers the bulbs is fully encircled in this aluminum, so it’s very hard to damage this material.

Keeping Track of the Charge and Charging

Both the front and rear lights have a battery gauge along their sides. The battery gauges are made of three smaller LEDs that span from green (max charge), to orange (about middle), and finally to red (in need of charge). This is a nice visual indicator for keeping track of how much juice you have left on this headlight/taillight combination.

As with anything, there are things to take into consideration before you go out and purchase these bike lights. First is the cost. These aren’t inexpensive lights, so if you don’t do a lot of night riding or tend to take only bike paths, you might consider a simple pair of reflectors. Secondly, as I mentioned before, the connecting strap isn’t really made for security. If you leave your lights on the bike, it’s a cinch for an unscrupulous person to simply remove them. With this in mind, pull them off and put them in your pocket between rides.

Finally, since Lezyne designed these lights to be visible for around 180 degrees, the front light can be a bit distracting while you’re riding. There should really be a shield here so that you don’t inadvertently look down at the light.